Why get involved with republican politics? 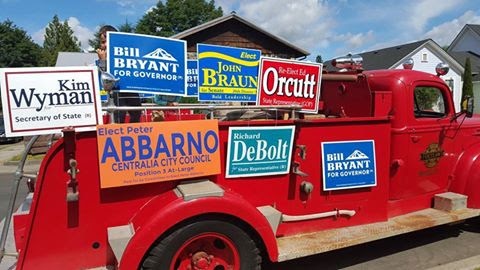 This post answers two questions; Why should I get involved in republican politics, and who are the Lewis County Republicans, anyway?

You need to be involved, because the decisions that are made every year in Olympia and Washington D.C. affect every part of your life. Republicans are the ones who fight to reduce the size of government and the power it has to interfere with your rights as a citizen, whether it’s your business, your education, or your personal property. The Democrats believe that more government is needed to create a better future for our society. This ideological battle is one of the most important battles we will ever fight, because once laws are put into place, it is very difficult to get rid of them. We see evidence of this every day, so Republicans constantly push forward principles of smaller government and protected constitutional rights.

The Republican Party is a lot like any group you will find – your family around the Thanksgiving table or your team at the office. It’s made up of people along a spectrum of beliefs. By reading the Republican Platform, you can see what Republicans believe. We create the platform every two years, and it is approved by a majority vote of Lewis County Precinct Committee Officers (PCOs). But each PCO may have some variation in how dedicated they are to a particular plank of the platform.

There are Republicans who are a very conservative in fiscal matters, but they tend more center when it comes to social issues. Some are a bit more libertarian than others. There are Republicans who focus on a single issue – they may be pro-life or they may want to see the national debt reduced. Then there is the national security of our country. Some believe we need to have a strong military and be leaders in the world while others are more isolationists. Each person also has a different view about how to communicate and what needs to happen to put our country on a path of success.

Within the party itself, you will find named groups that have slightly different beliefs – the Mainstream Republicans, the Liberty Caucus, the Christian Coalition, and may we never forget the Tea Party. These are just a few of the groups that have formed – people who are Republicans but who share priorities that may be a bit different from the other group. They work together on many issues and campaigns, but they work individually on some issues that are a higher priority for them.

Even with all the different views within the party, we are unified by the overarching goal of a government reduced in size and scope. Despite our differences in one area or another, we hold to President Ronald Reagan’s statement, “The person who agrees with you 80 percent of the time is a friend and an ally – not a 20 percent traitor.” We differ in some areas, and we have some lively debates and discussions, as a result. When people tell me how disappointed they are with a particular Republican legislator, I have ask who in the world they agree with on every issue. I love every person in my family dearly, but we sometimes disagree. It is the same with any group of people, no matter how closely aligned you are.

The bottom line in politics is that “he with the most votes wins.” In both Olympia and Congress, the group that has the most members gets to make the agenda. They choose which bills to hear and which bills to pass. If the Republicans do not have the majority, then it is the Democrats that set the entire agenda. So we are back to the question of why you should be involved. If we are going to change the direction of our state and country, we must work diligently to get that majority and keep it.

We would love to have your help with this task would gladly welcome you to the Lewis County Republican Party.